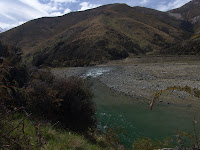 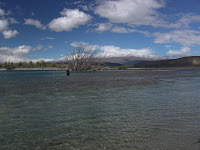 The weather was quite rough for Lower South Island back country opening day with high winds being followed by a nasty but quick moving front. Anybody who walked into the backcountry rivers would have had a great time if the had the opportunity to fish the next 2 days which were about as perfect blue bird as you can get.

It just goes to show how far South we are situated here (45 deg S) this morning it is snowing hard out (still is as I write this) and has even been settling in some places Queenstown. A very cold blast has come charging up from the Antartic. I am sure it will pass quickly enough and 2moro will probably be bluebird at least out west, maybe not down south.

The rivers wont be too affected as the storm has come in exceedingly cold. There could be some rises in river levels over the next couple of days when it warms up due to snow melt but the mostly there will be clean water available to fish and the higher up the system you go the better it should be.

I have been out guiding a bit since my last report and there has been some excellent fishing if you can beat the roaring 40’s winds – local knowledge is a good thing – you can’t beat the wind but you can work with it.

Some of the small spawning streams that have just opened seem to have had early spawning runs and numbers are down as rainbow trout have already been dropping back (it’s always possible that its the other way round tho) into the main system or lakes. However the bigger of the backcounrty rivers are fishing well and will contiue to do so over the next few months and some of the small streams are still well worth a walk.

Nymphing has been the way forward for the upstream fisherman but dry fly is starting up as the temps increase and it won’t be long now until we see some beetle action.

Didymo – it’s still there so don’t be complacent, check clean dry. Most of the rivers that have been more affected by it over last summer down here seem to have had some good floods strip much of it out and there was been some great fishing in areas that were choked up with it last summer.

Some of the rivers that have bad didymo build ups when I have been there over the last season or 2, the fish we have caught have been in excellent nick and have been very accepting of taking a dry. I have a theory – the fish are looking towards the surface more often for food sources to eat and therefore will come to the dry more easily than when they were feeding pre-dominatly on nymphs prior to didymo. I will continue to explore this strangely exciting idea.